Dante Jardon entered this fight with a pro record of 28-5-0 (22 KOs=79%) and he is ranked as the No.7 lightweight in the world (currently the #1 in this division is Rances Barthelemy). He lost two consecutive bouts between 2013 and 2014. against Takashi Miura (=Miura vs Jardon) and Adrian Estrella (=Jardon vs Estrella), but then he has won four bouts, the last one against Reyes Sanchez (=Jardon vs Sanchez).
His opponent, the former Ibf and Wba super-Fw champion Juan Carlos Salgado, has an official record of 26-5-1 (16 knockouts) but he is not ranked as he hasn’t fought since January 31, 2015 when he was defeated by Jairo Lopez; before this bout he had lost three consecutive fights. ‘Crazy’ Jardon vs Salgado is the main event of the evening. Watch the video and rate this fight!

END_OF_DOCUMENT_TOKEN_TO_BE_REPLACED

Review: 2013-03-09, speed, power, technique, one knockdown…is it not enough?…It is also a candidate for Knockout of the the Year 2013: the second fight between Salgado and Mendez gets four stars! Juan Carlos Salgado (26-1-1) entered as the No.3 super featherweight in the world while Argenis Mendez (20-2-0) entered as the No.5. In their first fight Salgado defeated Mendez by unanimous decision (September 10, 2011); this second bout is valid for the IBF super featherweight title (Salgado’s fourth defense). Watch the video!

END_OF_DOCUMENT_TOKEN_TO_BE_REPLACED 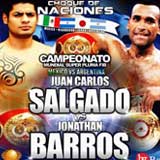 Review: 2012-08-18, good fight with some nice combinations: Juan Carlos Salgado vs Jonathan Victor Barros gets three stars. Juan Carlos Salgado (25-1-1) entered as the No.8 super featherweight in the world while Jonathan Victor Barros (34-2-1) entered as the No.9. Salgado vs Barros is valid for the IBF super featherweight title (Salgado’s third defense). Watch the video!