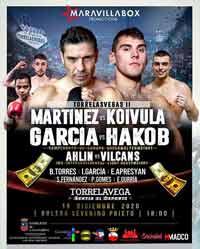 Review by AllTheBestFights.com: 2020-12-19, fight not so exciting between Sergio Martinez and Jussi Koivula: it gets two stars (take a look at our ranking of the best boxing fights of 2020).
The 45-year-old former world champion in two different weight classes Sergio Martinez (9 years older than Koivula) entered this fight with a professional boxing record of 52-3-2 (29 knockouts) and he is ranked as the No.98 middleweight in the world. Maravilla retired after his last loss, suffered against Miguel Cotto in 2014 (Sergio Martinez vs Miguel Cotto), but he came back to fight in August 2020 beating Jose Miguel Fandino (Sergio Martinez vs Jose Miguel Fandino). If you want to watch Martinez’s best fights, here is a 4-stars fight and “The Ring magazine” Knockout of the Year 2010, Sergio Martinez vs Paul Williams 2, and one that is ranked in the top 10 Users’ Fight of the Year 2012, Sergio Gabriel Martinez vs Matthew Macklin.
His opponent, Jussi Koivula, has an official record of 24-7-1 (9 knockouts) and he entered as the No.298 welterweight but he comes off two consecutive losses, against Conor Benn and Jordy Weiss; before this bout he had beat Alisher Ashurov. Koivula vs Martinez is the main event of the evening. Watch the video and rate this fight! 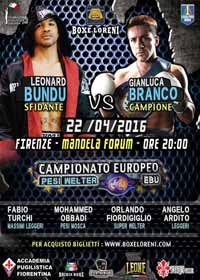 Review by AllTheBestFights.com: 2016-04-22, fight not particularly good between Leonard Bundu and Jussi Koivula: it gets two stars.

Leonard Bundu entered this fight with a professional boxing record of 32-1-2 (11 knockouts) and he is ranked as the No.12 welterweight in the world. His only loss occurred when he faced Keith Thurman in 2014 (=Thurman vs Bundu), after this bout he came back to win in 2015 against Pablo Munguia.
His opponent, Jussi Koivula (who replaces Gianluca Branco), has an official record of 19-2-1 (7 knockouts) and he suffered his last defeat last year, against Marcello Matano, after this bout he has collected two victories and one draw. Bundu vs Koivula is valid for the vacant EBU (European) welterweight title. Watch the video and rate this fight!