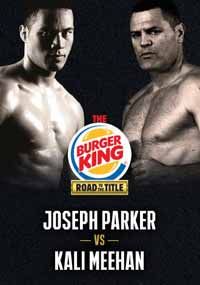 Review by AllTheBestFights.com: 2015-10-15, good finish between Joseph Parker and Kali Meehan: it gets three stars.

The 23-year-old undefeated Joseph Parker (22 years younger than Meehan) entered this fight with a perfect boxing record of 15-0-0 (13 KOs=87%) and he is ranked as the No.18 heavyweight in the world. He has already fought three times in 2015 beating Jason Pettaway, Yakup Saglam (=Parker vs Saglam) and Bowie Tupou (=Parker vs Tupou).
His opponent, Kali Meehan, has an official record of 42-5-0 (32 KOs=76%) and he entered as the No.27 in the same weight class. He suffered his last loss in 2012 when he faced Travis Walker, since then he has won four consecutive fights defeating Shane Cameron in his last one. Parker vs Meehan is valid for the WBO Oriental, WBA Oceania, PABA, WBC Eurasia Pacific and WBO Africa heavyweight titles. Watch the video and rate this fight!