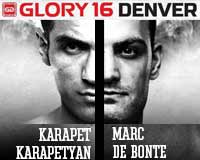 Review: 2014-05-03, disappointing fight between Karapet Karapetyan and Marc de Bonte: it gets two stars. Karapet Karapetyan entered this fight with a professional kickboxing record of 43-9-2 and he is ranked as the No.6 light heavyweight in the world, he fought three times in 2013 losing only his last bout against Nieky Holzken (semifinal of the Glory Ww tournament, Holzken vs Karapetyan 2); he came back to victory in 2014 beating Artur Kyshenko.
His opponent, Marc de Bonte, has an official record of 86-11-1 (or 82-9-1 on wikipedia) and he entered as the No.5 in the same weight class, he fought just once in 2013 defeating L’houcine Ouzgni via ko in the first round. In their first bout Marc de Bonte defeated Karapetyan by decision (May 19, 2012); this second fight, main event of Glory 16, is valid for the Glory welterweight title (De Bonte was expected to face Nieky Holzken but he recently suffered a shoulder injury in a car accident and was replaced by Karapetyan). Watch the video and rate this fight!

Review: 2013-12-21, nice and tough fight with two knockdowns: the second fight between Nieky Holzken and Karapet Karapetyan gets three stars. Nieky Holzken (75-11-0) entered as the No.5 super middleweight in the world while Karapet Karapetyan (42-8-2) entered as the No.8. In their first fight Holzken defeated Karapetyan by decision (February 12, 2012); this second bout is the semifinal of Glory welterweight tournament and it is on the undercard of Peter Aerts vs Rico Verhoeven – GLORY 13. Watch the video!

Review: 2012-06-09, fight not very spectacular between Joe Schilling and Karapet Karapetyan: two stars (fight ended by decision). Joe Schilling ranked as the No.11 light heavyweight in the world, entered the fight with a record of 12-3-0. Schilling vs Karapetyan is valid for the WBC Light Heavyweight title (Battle for the Belts). Watch the video!

Review: 2012-02-12, good fight between Nieky Holzken and Karapet Karapetyan: three stars (fight ended by unanimous decision). Nieky Holzken, ranked as the No.13 middleweight in the world, entered the fight with a record of 73-10-0. Holzken vs Karapetyan is valid for the WFCA World Super Middleweight title (K-1 Rules); main event of “Natural Powers”. Watch the video!