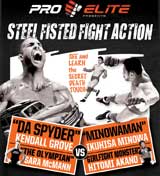 Review: 2012-01-21, pleasant fight between Kendall Grove and Ikuhisa Minowa but it is not enough to get our three stars (fight ended by unanimous decision). Kendall Grove, ranked as the No.46 middleweight in the world, entered the fight with a record of 13-9-0 while Ikuhisa Minowa had a record of 52-32-8. Grove vs Minowa is the main event of ProElite 3. Watch the video!

Review: 2011-08-27, Kendall Grove defeated Joe Riggs with a nice submission but it is not enough for our three stars. Grove vs Riggs is the main event of the of the mma event “ProElite – Arlovski vs Lopez”. Watch the video!