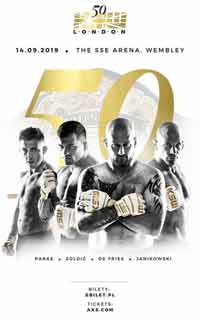 Review by AllTheBestFights.com: 2019-09-14, boring fight between Philip De Fries and Luis Henrique Barbosa de Oliveira: it gets one star.

The Ksw Hw champion Philip De Fries entered this fight with a professional mma record of 17-6-0 (82% finishing rate) and he is ranked as the No.18 heavyweight in the world. He lost to Ivan Shtyrkov in 2017 but then he has won five bouts beating Karol Bedorf (Philip De Fries vs Karol Bedorf) and Tomasz Narkun in his last two (Philip De Fries vs Tomasz Narkun).
His opponent, Luis Henrique Barbosa de Oliveira, has an official record of 12-5-0 (75% finishing rate) and he entered as the No.66 in the same weight class. He suffered three consecutive defeats between 2017 and 2018, the last one with Ryan Spann, but then he has beat Rodolfo Oliveira and Michal Andryszak. De Fries vs Henrique, main event of KSW 50, is valid for the KSW Heavyweight Championship title (De Fries’ third defense). Watch the video and rate this fight!