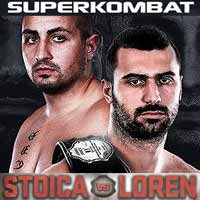 Review by AllTheBestFights.com: 2015-11-07, nice and tough exchanges between Andrei Stoica and Jorge Loren: it gets three stars.

Andrei Stoica entered this fight with a professional kickboxing record of 40-6-0 (25 knockouts) and he is ranked as the No.7 super cruiserweight in the world. He lost to Danyo Ilunga in 2014 (=Ilunga vs Stoica) but then he has collected eight consecutive victories winning over Pavel Voronin in his last one (=Stoica vs Voronin).
His opponent, the former Wako Pro world champion Loren Javier Jorge, has an official record of 79-15-4 (31 knockouts) and he entered as the No.12 in the same weight class but he lost two out of his last three bouts: against Redouan Cairo and Luis Tavares. Stoica vs Loren, main event of Superkombat WGP 2015 Final, is valid for the SuperKombat super cruiserweight title (Stoica’s fourth defense). Watch the video and rate this fight!

Review: 2014-03-29, bout with too many interruptions: Bogdan Stoica vs Loren Javier Jorge gets two stars. Bogdan Stoica entered this fight with a pro kickboxing record of 38-4-0 (29 knockouts) and he is ranked as the No.8 super cruiserweight in the world, last year he fought five times losing only his last bout against Igor Bugaenko (fight valid for the SK cruiserweight belt =Stoica vs Bugaenko).
His opponent, Loren Javier Jorge, has a record of 71-13-4 (28 knockouts), he fought seven times in 2013 losing three bouts, one of which against Bugaenko. Stoica vs Loren is on the undercard of Cedric Manhoef vs Amansio Paraschiv – SuperKombat New Heroes 7. Watch the video and rate this fight!

Review: 2012-05-27, even with one knockdown and the KO in the second round, the fight between Mirko “Cro Cop” Filipovic and Loren Javier Jorge has not been very exciting: two stars. Mirko “Cro Cop” Filipovic entered the fight with a record of 17-7-0 while Lorenzo Javier Jorge had a record of 68-8-4. Filipovic vs Loren, K-1 World GP heavyweight superfight (K-1 Rising 2012). Watch the video!