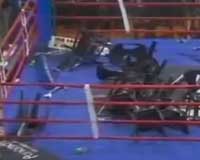 Review: 2012-02-10, too much clinching, headbutts, bites, punches on the back of the head and lastly an amazing riot at the end of the fight: this is not boxing, one star (fight ended by TKO in the tenth round). Luis Alberto Lazarte (49-10-2) entered as the No.5 light flyweight in the world while Johnriel Casimero (15-2-0) entered as the No.7. Lazarte vs Casimero is valid for the interim IBF light flyweight title. Watch the video!

END_OF_DOCUMENT_TOKEN_TO_BE_REPLACED

Review: 2011-09-02, too much clinch and little action between Luis Alberto Lazarte and Nerys Espinoza: 1 star. Lazarte def. Nerys Espinoza by unanimous decision as in their first fight in 2010; Lazarte vs Espinoza 2 was valid for the IBF light flyweight title eliminator. Watch the video!

END_OF_DOCUMENT_TOKEN_TO_BE_REPLACED

Review: 2011-04-30, the second fight between Ulises Solis and Luis Alberto Lazarte was not very exciting. Solis defeats Lazarte by split decision and wins the IBF light flyweight title of the Argentinian. Watch the video!