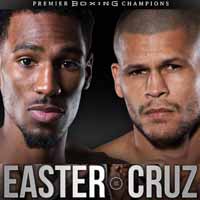 Review by AllTheBestFights.com: 2017-02-10, disappointing fight between Robert Easter Jr and Luis Cruz: it gets two stars.

The undefeated Robert Easter Jr entered this fight with a perfect boxing record of 18-0-0 (14 KOs=78%) and he is ranked as the No.1 lightweight in the world. He fought twice last year beating Argenis Mendez (=Mendez vs Easter Jr) and Richard Commey (=Easter Jr vs Commey).
His opponent, Luis Cruz, has an official record of 22-4-1 (16 knockouts) but he won just one out of his last four bouts, against Roberto Acevedo in 2015, after this fight he drew with Ivan Redkach. Robert Easter Jr vs Luis Cruz is valid for the IBF World lightweight title (Easter’s first defense). Watch the video and rate this fight!

Review: 2011-11-12, pleasant fight between Luis Cruz and Juan Carlos Burgos but it is not enough for our three stars; Burgos defeated Cruz by majority decision. The undefeated Luis Cruz (19-0-0) entered as the No.13 super featherweight in the world while Juan Carlos Burgos (27-1-0) entered as the No.21. Cruz vs Burgos is valid for the WBO NABO super featherweight title (undercard of Manny Pacquiao vs Juan Manuel Marquez 3). Watch the video!