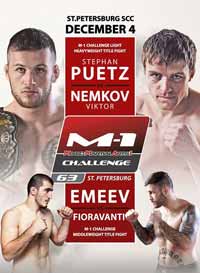 Review by AllTheBestFights.com: 2015-12-04, disappointing fight between Stephan Puetz and Viktor Nemkov: it gets two stars.

Stephan Puetz entered this fight with a professional mma record of 13-1-0 (77% finishing rate) and he is ranked as the No.17 heavyweight in the world. He lost to Joachim Christensen last year but then he has won four consecutive bouts defeating Marcin Tybura in his last fight (=Tybura vs Puetz).
His opponent, the 2011 World Combat Sambo champion Viktor Nemkov, has an official record of 22-5-0 (64% finishing rate) and he entered as the No.41 light heavyweight. He suffered his last loss in 2014 when he faced Puetz in their first bout (=Nemkov vs Puetz I), after this fight he came back to win beating Beksot Jiyanov, Florian Martin and Maro Perak. Nemkov vs Puetz 2, main event of M-1 Challenge 63, is valid for the M-1 Challenge light heavyweight title. Watch the video and rate this fight!