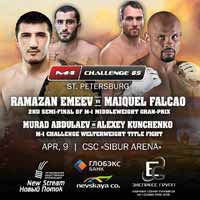 Review by AllTheBestFights.com: 2016-04-09, Ramazan Emeev vs Maiquel Falcao gets three stars only thanks to a good finish.

Ramazan Emeev entered this fight with a professional mma record of 13-3-0 (69% finishing rate) and he is ranked as the No.24 middleweight in the world. He lost to Vyacheslav Vasilevsky in 2014 (=Vasilevsky vs Emeev) but then he came back to win in 2015 taking revenge on Vasilevsky (=Vasilevsky vs Emeev 2) and beating Luigi Fioravanti (=Emeev vs Fioravanti).
His opponent, the black belt in Brazilian jiu-jitsu Maiquel Falcao, has an official record of 35-8-0 (86% finishing rate) and he entered as the No.39 in the same weight class but he comes off the loss against Aziz Karaoglu. Emeev vs Falcao is the main event of M-1 Challenge 65. Watch the video and rate this fight!