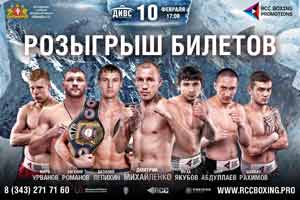 Review by AllTheBestFights.com: 2018-02-10, great performance by both boxers: Shavkat Rakhimov vs Malcolm Klassen gets three stars.

The undefeated Shavkatdzhon Rakhimov entered this fight with a perfect boxing record of 11-0-0 (8 knockouts) and he is ranked as the No.25 super featherweight in the world. He fought three times last year winning over Rogelio Jun Doliguez, Jimmy Paypa and Emanuel Lopez.
His opponent, the former Ibf super-Fw champion Malcolm Klassen, has a record of 33-7-2 (17 knockouts) and he entered as the No.19 in the same weight class but he comes off the loss against Mikhail Alexeev; before this bout, in 2016, he had beat Leonilo Miranda and Jack Asis. Rakhimov vs Klassen is valid for the IBO World super featherweight title (Rakhimov’s first defense); undercard of Dmitry Mikhaylenko vs Islam Dumanov. Watch the video and rate this fight!