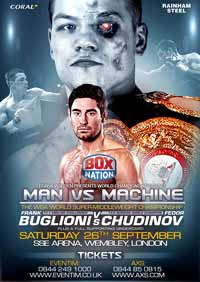 Review by AllTheBestFights.com: 2015-09-26, boring fight between Dereck Chisora and Marcelo Nascimento: it gets one star!

Dereck Chisora entered this fight with a pro boxing record of 21-5-0 (14 knockouts) and he is ranked as the No.17 heavyweight in the world. He suffered his last defeat in 2014 when he faced Tyson Fury in their rematch (=Chisora vs Fury 2) but then he came back to win in 2015 beating Beqa Lobjanidze (=Chisora vs Lobjanidze).
His opponent, Marcelo Luiz Nascimento, has a record of 18-10-0 (16 KOs=89%) but he lost five out of his last six bouts. Chisora vs Nascimento is on the undercard of Fedor Chudinov vs Frank Buglioni. Watch the video and rate this fight!