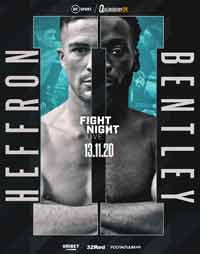 Review by AllTheBestFights.com: 2020-11-13, some good exchanges between Mark Heffron and Denzel Bentley 2 but it is not enough to get three stars: it gets two.
Mark Heffron entered this fight with a professional boxing record of 25-1-1 (19 KOs=76%) and he is ranked as the No.30 middleweight in the world. He suffered his only loss when he faced Liam Williams in 2018 (Liam Williams vs Mark Heffron), since then he has collected four victories and one draw, beating Ondrej Budera in February and drawing with Bentley in their first fight.
His opponent, the undefeated Denzel Bentley, has an official record of 13-0-1 (11 KOs=85%) and he entered as the No.46 in the same weight class. In his previous three fights, before the draw with Heffron, he had beat Mick Hall, Adam Grabiec and Kelcie Ball. Bentley vs Heffron 2 is valid for the vacant BBBofC British middleweight title. Watch the video and rate this fight! 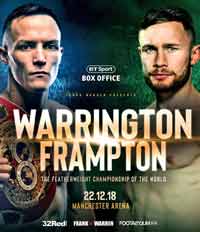 Review by AllTheBestFights.com: 2018-12-22, pretty good finish but the rest of the fight was not so exciting: Liam Williams vs Mark Heffron gets two stars.

Liam Williams entered this fight with a boxing record of 18-2-1 (13 knockouts) and he is ranked as the No.25 super welterweight in the world. He lost two consecutive bouts last year, both against Liam Smith (Liam Smith vs Liam Williams I and Liam Smith vs Liam Williams II) but then he has beat Darryl Sharp and Craig Nicholson.
His opponent, the undefeated Mark Heffron, has a perfect record of 21-0-0 (17 KOs=81%) and he entered as the No.36 middleweight. He has already fought three times in 2018 winning over Adam Grabiec, Andrew Robinson and Aryee Ayittey. Williams vs Heffron is valid for the vacant BBBofC British middleweight title; undercard of Carl Frampton vs Josh Warrington. Watch the video and rate this fight!