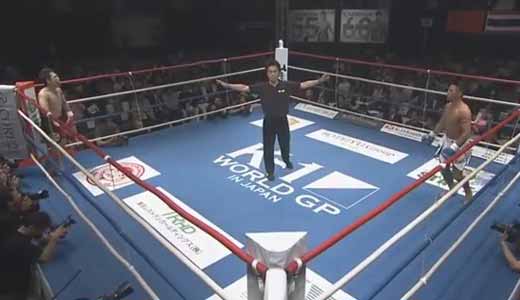 Review by AllTheBestFights.com: 2016-04-24, spectacular finish between Taiga and Masahiro Yamamoto: this is one of the best k-1 fights of 2016 and it gets four stars!

The 19-year-old Taiga (13 years younger than Yamamoto) entered this fight with a pro kickboxing record of 12-3-0 (3 knockouts) while his opponent, the 2009 Krush champion Masahiro Yamamoto, has an official record of 46-15-7 (13 knockouts). Taiga comes off two consecutive losses, against Takeru (2015 Fight of the Year candidate Takeru vs Taiga 2) and Leona Pettas, while Yamamoto fought twice last year beating Gagny Baradji but then he was defeated by Koya Urabe. Taiga vs Yamamoto is the quarter final of the K-1 World GP 2016 -60kg Japan tournament; undercard of Takeru vs Yoadsenchai Sor Sopit. Watch the video and rate this fight!