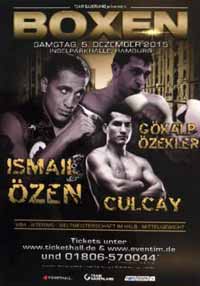 Review by AllTheBestFights.com: 2015-12-05, one sided fight between Kubrat Pulev and Maurice Harris: it gets two stars.

Kubrat Pulev entered this fight with a professional record of 21-1-0 (11 knockouts) and he is ranked as the No.5 heavyweight in the world (currently the #1 in this division is Tyson Fury) while his opponent, Maurice Harris, has a boxing record of 26-20-3 (11 knockouts). Pulev suffered his only loss in 2014 when he faced Wladimir Klitschko (=Klitschko vs Pulev), after this bout he came back to win defeating George Arias (=Pulev vs Arias). Pulev vs Harris is on the undercard of Jack Culcay vs Dennis Hogan. Watch the video and rate this fight!