Review: 2014-04-27, fight not particularly exciting between Melvin Manhoef and Evangelista ‘Cyborg’ Santos: it gets two stars. Melvin Manhoef entered this fight with a professional mma record of 27-11-1 (92% finishing rate – he has never won by submission) and he is ranked as the No.68 middleweight in the world, he fought and lost twice in 2013: against Brock Larson (=Manhoef vs Larson) and Mamed Khalidov (=Khalidov vs Manhoef).
His opponent, the black belt in Brazilian jiu-jitsu Evangelista ‘Cyborg’ Santos, has an official record of 19-15-0 (89% finishing rate), last year he fought just once defeating Elton Rodrigues in the first round. In their first bout (an epic war) Santos was defeated by Manhoef via ko in the second round (fight valid for the Cage Rage light heavyweight title – February 4, 2006); this second bout is the main event of “Gringo Super Fight 10”. Watch the video and rate this fight!

Review: 2013-11-08, good fight with some tough exchanges: Melvin Manhoef vs Zabit Samedov gets three stars. Melvin Manhoef (37-10-0) entered as the No.10 super cruiserweight in the world while Zabit Samedov (77-11-1) entered as the No.3. Manhoef vs Samedov is the semifinal of the Legend -93kg Grand Prix tournament; undercard of Mirko Filipovic vs Alexey Oleinik – Legend 2. Watch the video! 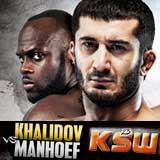 Review: 2012-01-28, pleasant fight between Melvin Manhoef and Tyrone Spong but it isn’t enough to get our three stars (fight ended by unanimous decision). Melvin Manhoef (37-9-0) entered as the No.9 super cruiserweight in the world while Tyrone Spong (67-6-1) entered as the No.11 heavyweight. Manhoef vs Spong is on the undercard of Badr Hari vs Gokhan Saki 2. Watch the video!