Review: 2014-12-15, pretty good finish between Mighty Mo and Alexandru Lungu: it gets three stars. Siala-Mou Siliga, better known as Mighty Mo, entered this fight with a professional mma record of 6-3-0 (100% finishing rate) and he is ranked as the No.56 heavyweight in the world, he has fought twice in 2014 beating Peter Graham (=Graham vs Mighty Mo) but then he lost to Alexander Volkov (semifinal of the Bellator Hw tournament, Volkov vs Mighty Mo).
His opponent, the 40-year-old judoka Alexandru Lungu (four years younger than Mo), has an official record of 9-3-0 (100% finishing rate), he has fought once in 2014 losing to Tomasz Czerwinski. Mighty Mo vs Lungu is the main event of Romanian Xtreme Fighting 15. Watch the video and rate this fight! 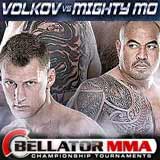 Review: 2014-04-11, spectacular finish between Alexander Volkov and Mighty Mo: it gets three stars. Alexander Volkov entered this fight with a pro mma record of 20-4-0 (80% finishing rate with only one victory via submission) and he is ranked as the No.25 heavyweight in the world, last year he fought just once losing the Bellator Hw title against Vitaly Minakov (=Volkov vs Minakov); he came back to victory in 2014 defeating Mark Holata (=Volkov vs Holata).
His opponent, Siala-Mou Siliga better known as Mighty Mo, has an official record of 6-2-0 (100% finishing rate) and he entered as the No.39 in the same weight class, he is 43 years old (18 years older than Volkov) and he comes off three consecutive wins. Volkov vs Mighty Mo is the semifinal of the Bellator heavyweight tournament; undercard of Lavar Johnson vs Blagoi Ivanov – Bellator 116. Watch the video and rate this fight!

Review: 2014-03-07, some good single shots but the fight between Peter Graham and Mighty Mo was not particularly exciting: it gets two stars. Peter Graham entered this fight with a mma record of 9-6-0 (89% ko/tko victory rate) and he is ranked as the No.31 heavyweight in the world while Mighty Mo (real name: Siala-Mou Siliga) has an official record of 5-2-0 (100% finishing rate) and he entered as the No.92 in the same weight class. Both fighters fought in the K-1 World Grand Prix but they have never faced each other, moreover they both debuted and fought twice in 2013 for the Bellator Mma promotion. Graham vs Mo is the quarterfinal of the Bellator heavyweight tournament; undercard of Eduardo Dantas vs Anthony Leone – Bellator 111. Watch the video and rate this fight!

Review: 2013-10-25, fight not particularly exciting between Ron Sparks and Mighty Mo: it gets two stars. Ron Sparks entered the fight with a record of 8-2-0 (88% finishing rate) while Mighty Mo, former K-1 kickboxing fighter (his real name is Siala-Mou Siliga), had a record of 4-2-0 (100% ko/tko victory rate). Sparks vs Mighty Mo is on the undercard of Will Brooks vs Saad Awad 2 – Bellator 105. Watch the video!

Review: 2012-12-22, good first round and some nice exchanges between Raul Catinas and Mighty Mo but it is not enough to get three stars. Raul Catinas ranked as the No.15 heavyweight in the world, entered the fight with a record of 17-5-0 while Mighty Mo had a record of 16-18-0. In their first fight Catinas defeated Mighty Mo by unanimous decision (October 2, 2010), this second fight is a heavyweight superfight of SuperKombat WGP 2012 Final. Watch the video!

Review: 2011-07-16, it was not a great fight the semifinal of the four man heavyweight Tournament (K-1 Rules, 3×3) between Mighty Mo and Mladen Brestovac: 2 stars. Mladen Brestovac defeated Mighty Mo by TKO in the first round (SuperKombat World Grand Prix 2). Watch the video!