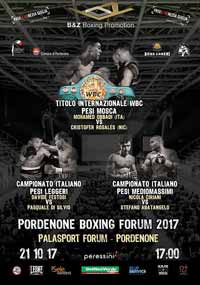 Review by AllTheBestFights.com: 2017-10-21, pretty good fight between Cristofer Rosales and Mohammed Obbadi: it gets three stars.

Cristofer Rosales entered this fight with a pro record of 24-3-0 (15 knockouts) and he is ranked as the No.12 flyweight in the world. He has already fought five times in 2017 losing once, with Andrew Selby (=Selby vs Rosales); after this bout he came back to win with Martin Tecuapetla.
His opponent, the undefeated Mohammed Obbadi, has a perfect record of 13-0-0 (10 KOs=77%) and he entered as the No.33 in the same weight class. In his last three bouts he has won over Silvio Olteanu, Mishiko Shubitidze and Sammy Reyes. Rosales vs Obbadi is valid for the vacant WBC International flyweight title. Watch the video and rate this fight!