Review by AllTheBestFights.com: 2015-04-18, spectacular finish between Mohamed Boubkari and Moises Baute: it is very close to get four stars!

Mohamed Boubkari entered this fight with a pro kickboxing record of 36-12-1 (20 knockouts) while his opponent, Moises Baute, has an official record of 14-4-0 (11 KOs=78%). Boubkari vs Baute, main event of Enfusion Live 27, is valid for the Enfusion world title -95kg (held by Boubkari). Watch the video and rate this fight! 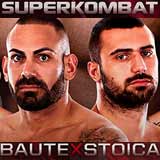