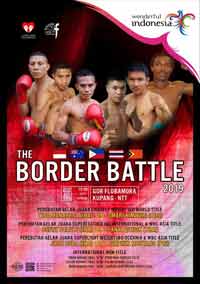 Review by AllTheBestFights.com: 2019-07-07, fight not so exciting between Tibo Monabesa and Omari Kimweri: it gets two stars.

Tibo Monabesa entered this fight with a pro boxing record of 19-1-2 (8 knockouts) and he is ranked as the No.29 light flyweight in the world. He was defeated by Hiroto Kyoguchi last year but he came back to win against Wittawas Basapean in 2019.
His opponent, Omari Kimweri, has a record of 17-4-0 (7 knockouts) and he entered as the No.41 in the same weight class. He lost to Wanheng Menayothin in 2017 (Wanheng Menayothin vs Omari Kimweri) but then he beat Suphakit Khampha in 2018. Monabesa vs Kimweri is valid for the vacant IBO World light flyweight title. Watch the video and rate this fight! 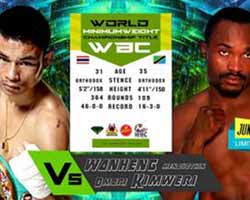 Review by AllTheBestFights.com: 2017-06-03, pretty good fight between Wanheng Menayothin and Omari Kimweri: it gets three stars.

The undefeated Wbc champion Wanheng Menayothin (also known as Chayaphon Moonsri) entered this fight with a perfect record of 46-0-0 (17 knockouts) and he is ranked as the No.1 minimumweight in the world. He has already fought twice in 2017 beating Melvin Jerusalem (=Menayothin vs Jerusalem) and Jaysever Abcede.
His opponent, Omari Kimweri, has a boxing record of 16-3-0 (6 knockouts) but he is not ranked as he hasn’t fought since April 15, 2016 when he defeated Randy Petalcorin. His last loss occurred in 2013 when he faced Shin Ono. Chayaphon Moonsri vs Omari Kimweri is valid for the WBC World minimumweight title (Menayothin’s seventh defense). Watch the video and rate this fight!