Home » One Championship Pride of Lions 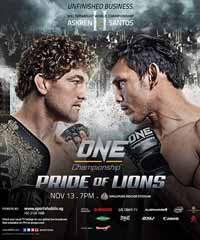 The former Lumpinee and Rajadamnern muay thai champion Dejdamrong Sor Amnuaysirichoke entered this fight with a pro mma record of 5-0-0 (80% finishing rate) and he is ranked as the No.9 strawweight in the world. Dejdamrong ‘Kru Rong’ has fought once in 2015 winning the inaugural One Fc strawweight title against Roy Doliguez (=Doliguez vs Dejdamrong).
His opponent, Yago Bryan Farias de Morais, has a record of 3-0-0 (33% ko/tko victory rate – he has never won by submission) and he is the current Shooto South America champion. Dejdamrong vs Yago Bryan ‘Codorninha’ is not valid anymore for the One FC strawweight title because Yago Bryan failed to make the 115 lb weight limit; this fight was on the undercard of Ben Askren vs Luis Santos 2 but ‘Sapo’ Santos failed to make weight and the bout was cancelled. Watch the video and rate this fight!