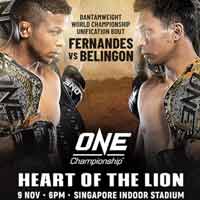 Review by AllTheBestFights.com: 2018-11-09, good fight between Bibiano Fernandes and Kevin Belingon 2: it gets three stars.

The black belt in Bjj, former Dream and current ONE Bw champion Bibiano Fernandes entered this fight with a pro record of 22-3-0 (45% finishing rate) and he is ranked as the No.19 bantamweight in the world. He suffered his last loss when he faced Hiroyuki Takaya in 2010, since then he has collected 14 consecutive victories beating Reece McLaren (Bibiano Fernandes vs Reece McLaren), Andrew Leone and Martin Nguyen in his last three (Bibiano Fernandes vs Martin Nguyen).
His opponent, the black belt in Wushu Kevin Belingon, has an official mma record of 19-5-0 (58% finishing rate) and he entered as the No.24 in the same weight class. He was defeated by Bibiano Fernandes in their first fight in 2016 (Fernandes vs Belingon I) but then he has won six bouts defeating Andrew Leone and Martin Nguyen in his last two as well. Fernandes vs Belingon 2, main event of ONE FC 78, is valid for the ONE bantamweight title – ONE FC 78. Watch the video and rate this fight!

END_OF_DOCUMENT_TOKEN_TO_BE_REPLACED 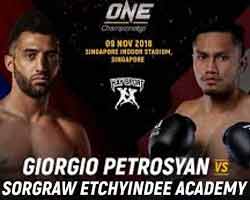 Review by AllTheBestFights.com: 2018-11-09, great fight between Giorgio Petrosyan and Sorgraw Petchyindee: it gets three stars.

The former Glory, K-1 World Max and current Bellator kickboxing champion Giorgio Petrosyan entered this fight with a pro record of 88-2-2 (38 knockouts) and he is ranked as the No.2 super welterweight in the world. ‘The Doctor’ Petrosyan suffered his second defeat of his career during the semifinal of the Glory lightweight tournament against Andy Ristie in 2013 (Petrosyan vs Andy Ristie), since then he has won twelve bouts beating Crhis Ngimbi (Giorgio Petrosyan vs Chris Ngimbi 2), Jo Nattawut (Giorgio Petrosyan vs Jo Nattawut) and Chingiz Allazov (Giorgio Petrosyan vs Chingiz Allazov).
His opponent, the former Lumpinee muay thai champ Sorgraw Petchyindee Academy, has a record of 37-17-0 and he enetered as the No.9 in the same weight class; the Thai fighter comes off the victory over Samy Sana in June. Petrosyan vs Sorgraw is on the undercard of Bibiano Fernandes vs Kevin Belingon 2 – One FC 78. Watch the video and rate this fight!