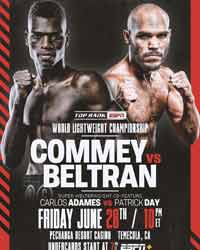 Review by AllTheBestFights.com: 2019-06-28, fight not so exciting between Carlos Adames and Patrick Day: it gets two stars.

The undefeated Carlos Adames entered this fight with a perfect boxing record of 17-0-0 (14 KOs=82%) and he is ranked as the No.12 super welterweight in the world. In his last three bouts he has won over Joshua Conley (Carlos Adames vs Joshua Conley), Juan Ruiz and Frank Galarza.
His opponent, Patrick Day, has an official boxing record of 17-2-1 (6 knockouts) and he entered as the No.20 in the same weight class. He was defeated by Carlos Garcia Hernandez in 2015 but then he has won six consecutive fights beating Ismail Iliev in 2019. Adames vs Day is valid for the NABF and WBO NABO super welterweight titles; undercard of Richard Commey vs Raymundo Beltran. Watch the video and rate this fight!