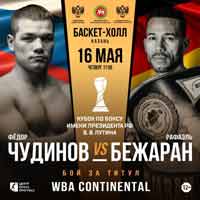 Review by AllTheBestFights.com: 2019-05-16, we hope to see a rematch between Fedor Chudinov and Rafael Bejaran: it gets two stars.

The former Wba super-Mw champion Fedor Chudinov entered this fight with a professional boxing record of 19-2-0 (13 knockouts) and he is ranked as the No.8 super middleweight in the world (currently the #1 in this division is Callum Smith). He suffered two consecutive losses between 2016 and 2017, against Felix Sturm (via majority decision, Sturm vs Chudinov 2) and George Groves (Groves vs Chudinov), but then he has won five fights defeating Wuzhati Nuerlang in 2019 (Fedor Chudinov vs Wuzhati Nuerlang).
His opponent, Rafael Bejaran, has an official record of 26-3-1 (12 knockouts) and he entered as the No.87 in the same weight class. He lost to Jack Culcay last year (Jack Culcay vs Rafael Bejaran) but he came back to win with Istvan Zeller in 2019. Chudinov vs Bejaran is valid for the vacant WBA Continental super middleweight title. Watch the video and rate this fight! 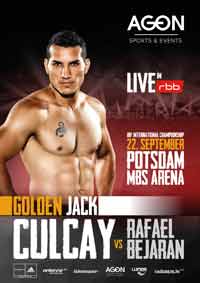 Review by AllTheBestFights.com: 2018-09-22, pretty good fight between Jack Culcay and Rafael Bejaran: it gets three stars.

The former Olympian and former Wba light-Mw champion Jack Culcay entered this fight with a pro boxing record of 24-3-0 (12 knockouts) and he is ranked as the No.14 middleweight in the world. He suffered two consecutive defeats in 2017, with Demetrius Andrade (via split decision, Andrade vs Culcay) and Maciej Sulecki (Maciej Sulecki vs Jack Culcay) but he came back to win in 2018 with Craig Cunningham and Adasat Rodriguez (Jack Culcay vs Adasat Rodriguez).
His opponent, Rafael Bejaran, has a record of 25-2-1 (11 knockouts) and he entered as the No.48 super welterweight. He suffered his last loss when he faced Ante Bilic in 2012, since then he has collected eleven victories and one draw beating Attila Koro in his last one. Culcay vs Bejaran is valid for the IBF International middleweight title. Watch the video and rate this fight!