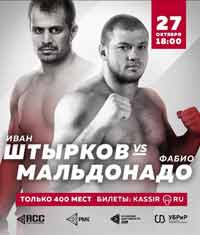 Review by AllTheBestFights.com: 2018-10-27, disappointing fight between Ivan Shtyrkov and Fabio Maldonado: it gets two stars.

The undefeated Ivan Shtyrkov entered this fight with a professional mma record of 13-0-1 (69% finishing rate) and he is ranked as the No.24 heavyweight in the world. In his last three fights ‘Ural Hulk’ Shtyrkov has won over Christian M’Pumbu (Ivan Shtyrkov vs Christian M’Pumbu) and Marcin Lazarz (Ivan Shtyrkov vs Marcin Lazarz) but then he has tied with Geronimo dos Santos (Ivan Shtyrkov vs Geronimo dos Santos).
His opponent, the former FNG light-Hw champion Fabio Maldonado, has an official record of 24-12-0 (75% finishing rate) and he entered as the No.36 light heavyweight but ‘Caipira de Aco’ Maldonado won just two out of his last seven bouts, against Abdul-Khamid Davlyatov and Kurban Omarov; after this fight he has lost to Nikita Krylov (Nikita Krylov vs Fabio Maldonado). Shtyrkov vs Maldonado is the main event of RCC 4 – Russian Cagefighting Championship. Watch the video and rate this fight!