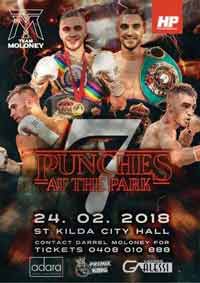 Review by AllTheBestFights.com: 2018-02-24, pretty good fight between Andrew Moloney and Rene Dacquel: it gets three stars.

The undefeated Andrew Moloney entered this fight with a perfect boxing record of 15-0-0 (10 knockouts) and he is ranked as the No.26 super flyweight in the world. He fought four times last year winning over Renoel Pael, Aramis Solis, Raymond Tabugon and Hashimu Zuberi.
His opponent, Rene Dacquel, has an official record of 20-6-1 (6 knockouts) and he entered as the No.24 in the same weight class. He lost to Takuma Inoue in 2015 but then he has won five consecutive bouts beating Shota Kawaguchi and Hayato Kimura in 2017. Moloney vs Dacquel is valid for the OPBF and WBA Oceania super flyweight titles. Watch the video and rate this fight!