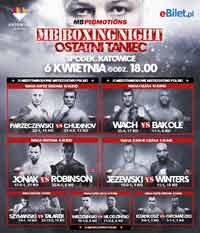 Review by AllTheBestFights.com: 2019-04-06, pretty good fight between Robert Parzeczewski and Dmitrii Chudinov: it gets three stars.

Robert Parzeczewski entered this fight with a professional boxing record of 22-1-0 (15 knockouts) and he is ranked as the No.27 super middleweight in the world. He suffered his only loss when he faced Jessy Luxembourger in 2015, since then he has won 14 consecutive bouts defeating Tim Cronin, Jackson Junior and Dariusz Sek in 2018.
His opponent, the former interim Wba Mw champion Dmitrii Chudinov, has an official record of 21-4-2 (13 knockouts) and he entered as the No.88 in the same weight class but he won just one out of his last three fights, against Siarhei Khamitski; after this bout he has lost to Azizbek Abdugofurov (Azizbek Abdugofurov vs Dmitrii Chudinov) and Patrick Mendy. Parzeczewski vs Chudinov is valid for the vacant Republic of Poland International super middleweight title. Watch the video and rate this fight!