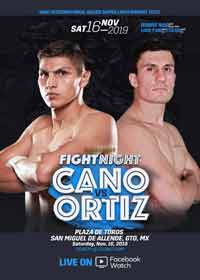 Review by AllTheBestFights.com: 2019-11-16, nice and tough exchanges between Pablo Cesar Cano and Roberto Ortiz: it gets three stars.

Pablo Cesar Cano entered this fight with a pro boxing record of 32-7-1 (22 knockouts) and he is ranked as the No.6 super lightweight in the world (currently the #1 in this division is Josh Taylor). . He lost two consecutive fights in 2017, against Fidel Maldonado Jr and Marcelino Nicolas Lopez, but then he has won over Ruslan Madiev and Jorge Linares (Jorge Linares vs Pablo Cesar Cano).
His opponent, Roberto Ortiz, has a record of 35-4-2 (26 knockouts) but he is not ranked as he hasn’t fought since September 15, 2018 when he was defeated by Vergil Ortiz Jr; before this bout he had also lost to Jose Eduardo Lopez Rodriguez and Cletus Seldin. Cano vs Ortiz is valid for the WBC International Silver super lightweight title. Watch the video and rate this fight! 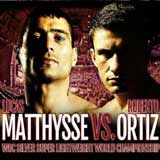 Review: 2014-09-06, fight not so exciting with a bad referee…Lucas Matthysse vs Roberto Ortiz gets two stars. Lucas Martin Matthysse entered this fight with a professional boxing record of 35-3-0 (33 KOs=94%) and he is ranked as the No.2 light welterweight in the world, he suffered his last loss at the end of 2013 when he faced the undefeated #1 light-Ww Danny Garcia (=Garcia vs Matthysse); he came back to win in 2014 beating John Molina in one of the best boxing fights of the year (4-stars-fight Matthysse vs Molina).
His opponent, the undefeated Roberto Ortiz, has an official record of 31-0-1 (24 KOs=77%) and he entered as the No.39 in the same weight class, he has already fought once in 2014 beating Ramiro Alcaraz in five rounds and successfully defending his WBC Silver light-Ww belt. Matthysse vs Ortiz is valid for the WBC Silver light welterweight title; undercard of Adrien Broner vs Emmanuel Taylor. Watch the video and rate this fight!

Review: 2013-06-15, good second part of the fight and two knockdowns: Roberto Ortiz vs Jorge Romero gets three stars. The undefeated Roberto Ortiz (28-0-1, 22 KOs=76%) entered as the No.47 light welterweight in the world while Jorge Romero (24-5-0, 21 KOs) entered as the No.95. Ortiz vs Romero is valid for the WBC Silver light welterweight title. Watch the video!