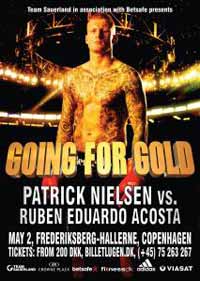 Review by AllTheBestFights.com: 2015-05-02, pretty boring fight between Patrick Nielsen and Ruben Acosta: it gets two stars.

Patrick Nielsen entered this fight with a pro boxing record of 24-1-0 (12 knockouts) and he is ranked as the No.17 super middleweight in the world. He lost his first bout last year, against Dmitry Chudinov (=Nielsen vs Chudinov), but then he came back to win beating Lukasz Wawrzyczek and George Tahdooahnippah (=Nielsen vs Tahdooahnippah).
His opponent, Ruben Eduardo Acosta, has a record of 30-11-5 (10 knockouts) and he entered as the No.54 in the same weight class. He lost in 2014 as well, against Maxim Vlasov and Isidro Ranoni Prieto, but after the second defeat he has won twice: with Mauricio Roberto Caceda and Rolando Wenceslao Mansilla. Nielsen vs Acosta is the main event of the evening. Watch the video and rate this fight!