Review: 2012-06-16, good fight between Ryan Rhodes and Sergey Rabchenko: three stars (fight ended by TKO in the seventh). Ryan Rhodes (46-5-0) entered as the No.21 light middleweight in the world while the undefeated Sergey Rabchenko (20-0-0) entered as the No.31. Rhodes vs Rabchenko is valid for the vacant EBU (European) light middleweight title; undercard of Scott Quigg vs Rendall Munroe. Watch the video!

END_OF_DOCUMENT_TOKEN_TO_BE_REPLACED 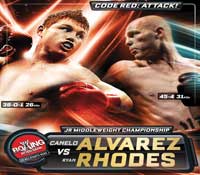 Review: 2011-06-18, nice fight of Saul “Canelo” Alvarez that dominated Ryan Rhodes and defended his WBC light middleweight title for the first time. Saul Alvarez knocked down Ryan Rhodes in the fourth round but the match ended in the eleventh when the referee stopped the fight (TKO) . Watch the video!