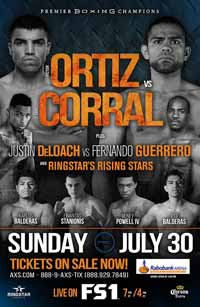 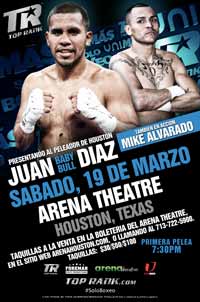 Review by AllTheBestFights.com: 2016-03-19, nice and tough exchanges between Mike Alvarado and Saul Corral: it gets three stars.

The former Wbo light-Ww champion Mike Alvarado entered this fight with a professional boxing record of 34-4-0 (23 knockouts) while his opponent, Saul Corral, has an official record of 19-6-0 (10 knockouts). Alvarado is not ranked as he hasn’t fought since January 24, 2015 when he was defeated by Brandon Rios (=Alvarado vs Rios 3); before this bout he had suffered two consecutive losses, against Juan Manuel Marquez (=Marquez vs Alvarado) and Ruslan Provodnikov (one of the best boxing fights of 2013, Alvarado vs Provodnikov). Alvarado vs Corral is on the undercard of Juan Diaz vs Fernando Garcia. Watch the video and rate this fight!