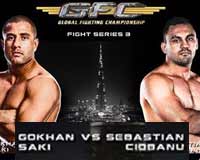 Review by AllTheBestFights.com: 2015-04-17, pretty good fight between Gokhan Saki and Sebastian Ciobanu: it gets three stars.

Gokhan Saki entered this fight with a professional kickboxing record of 81-16-0 (58 knockouts) and he is ranked as the No.1 super cruiserweight in the world. He suffered his last loss in 2013 when he faced #1 heavyweight Rico Verhoeven (=Saki vs Verhoeven) but after this bout he won the Glory light-Hw title beating Tyrone Spong in the final of the tournament (=Spong vs Saki 2).
His opponent, Sebastian Ciobanu, has an official record of 27-14-1 (4 knockouts) but he comes off two consecutive defeats, against Vladimir Mineev and Maxim Bolotov. Saki vs Ciobanu is the main event of Global Fighting Championship 3 (GFC-3). Watch the video and rate this fight!

END_OF_DOCUMENT_TOKEN_TO_BE_REPLACED

Review: 2012-12-22, the second fight between Ismael Londt and Sebastian Ciobanu was not particularly exciting: two stars. Ismael Londt (31-3-1) entered as the No.13 heavyweight in the world while Sebastian Ciobanu (23-9-0) entered as the No.16. In their first fight Londt defeated Ciobanu by Ko (July 16, 2011); this second fight is the semifinal of the SuperKombat WGP 2012 heavwyeight tournament. Watch the video!

END_OF_DOCUMENT_TOKEN_TO_BE_REPLACED 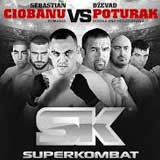 END_OF_DOCUMENT_TOKEN_TO_BE_REPLACED

Review: 2012-05-12, three knockdowns and three stars for Sebastian Ciobanu vs Redouan Cairo (fight ended by TKO in the second round). Sebastian Ciobanu (20-9-0) entered as the No.16 heavyweight in the world while Redouan Cairo entered as the No.11 super cruiserweight. Ciobanu vs Cairo is on the undercard of Bogdan Stoica vs Ivan Stanic (SuperKombat World Grand Prix II 2012). Watch the video!

END_OF_DOCUMENT_TOKEN_TO_BE_REPLACED

Review: 2011-07-16, nice fight and good action between Sebastian Ciobanu and Ismael Londt, semifinal of the four man heavyweight Tournament (SuperKombat World Grand Prix 2). Ismael Londt knocked down Sebastian Ciobanu in the first round and knocked him out in the last round with an explosive series of punches. Watch the video!