Review: 2013-06-20, pretty boring fight between Shamil Zavurov and Yasubey Enomoto: it gets two stars. Shamil Zavurov (21-2-1, 62% finishing rate) entered as the No.51 lightweight in the world while Yasubey Enomoto (10-4-0, 50% finishing rate) entered as the No.76 welterweight. In their first fight Zavurov defeated Enomoto by decision but in the rematch the Russian was defeated by submission (both fights were held in 2011); this third bout is the main event of “Fight Nights: Battle of Moscow 12”. Watch the video! 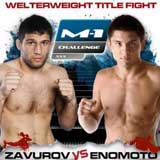 Review: 2011-12-09, even with the nice submission in the fifth round, the fight between Shamil Zavurov and Yasubey Enomoto was not very spectacular: two stars (in their first fight Zavurov won Enomoto by unanimous decision). Shamil Zavurov, ranked as the No.50 welterweight in the world entered the fight with a record of 18-1-0 while Yasubey Enomoto had a record of 8-3-0. Zavurov vs Enomoto 2 is valid for the M-1 Global Welterweight Championship (main event of the “M-1 Challenge 30”). Watch the video!

Review: 2011-04-28, the main event of the M-1 Challenge 25 it was not very exciting. Shamil Zavurov defeats Yasubey Enomoto by unanimous decision. Watch the video!