Review by AllTheBestFights.com: 2017-11-25, some good exchanges between Zabit Magomedsharipov and Sheymon Moraes but it is not enough to get three stars: it gets two (UFC Performance of the Night).

Zabit Magomedsharipov entered this fight with a record of 13-1-0 (85% finishing rate) and he is ranked as the No.35 featherweight in the world. He suffered his only loss when he faced Igor Egorov in 2013, since then he has won nine consecutive bouts beating Mike Santiago in 2017.
His opponent, Sheymon da Silva Moraes, has a mma record of 9-1-0 (56% ko/tko victory rate – he has never won via submission) but he is not ranked as he hasn’t fought since June 17, 2016 when he defeated Luis Palomino. In 2015 he had lost to Marlon Moraes (=Marlon Moraes vs Sheymon Moraes) but then he had beat Robbie Peralta. Magomedsharipov vs Moraes is on the undercard of Michael Bisping vs Kelvin Gastelum – UFC Fight Night 122. Watch the video and rate this fight! 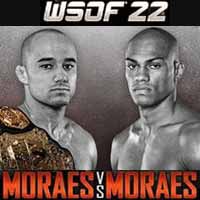 Marlon Moraes entered this fight with a pro mma record of 14-4-1 (64% finishing rate) and he is ranked as the No.8 bantamweight in the world while his opponent, the undefeated Sheymon da Silva Moraes, has a record of 7-0-0 (57% ko/tko victory rate – he has never won via submission) and he entered as the No.7 in the same weight class (currently the #1 in this division is TJ Dillashaw). Marlon Moraes suffered his last defeat in 2011 when he faced Deividas Taurosevicius, since then he has collected nine consecutive victories winning the Wsof Bw title against Josh Rettinghouse in 2014 (=Moraes vs Rettinghouse) and defending it once in 2015 with Josh Hill (=Moraes vs Hill). Marlon Moraes vs Moraes is valid for the WSOF bantamweight title (Marlon’s second defense); undercard of Rousimar Palhares vs Jake Shields – WSOF 22. Watch the video and rate this fight!