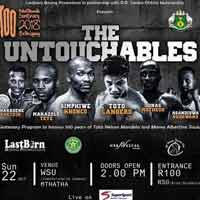 Review by AllTheBestFights.com: 2018-07-22, pretty good fight between Simphiwe Khonco and Toto Landero: it gets three stars.

The Ibo champion Simphiwe Khonco entered this fight with a pro boxing record of 18-5-0 (7 knockouts) but he is not ranked as he hasn’t fought since June 10, 2017 when he defeated Lito Dante. Before this bout he had beat Nkosinathi Joyi and Siyabonga Siyo in 2016, while in 2015 he had lost to Hekkie Budler (Hekkie Budler vs Simphiwe Khonco).
His opponent, Toto Landero, has a record of 10-2-2 (2 knockouts) and he entered as the No.13 minimumweight in the world but he comes off the loss against Knockout CP Freshmart (Knockout CP Freshmart vs Toto Landero); before this fight, in 2017, he had won over Vic Saludar and Powell Balaba. Khonco vs Landero is valid for the IBO World minimumweight title (Khonco’s third defense). Watch the video and rate this fight!

END_OF_DOCUMENT_TOKEN_TO_BE_REPLACED 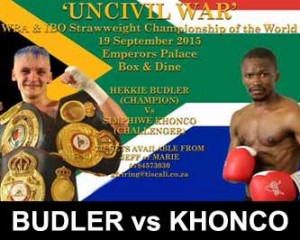 Review by AllTheBestFights.com: 2015-09-19, great performance by both boxers: Hekkie Budler vs Simphiwe Khonco gets three stars.

Hekkie Budler entered this fight with a pro boxing record of 28-1-0 (9 knockouts) and he is ranked as the No.2 minimumweight in the world (currently the #1 in this division is Wanheng Menayothin). Budler’s only loss occurred in 2011 when he faced Gideon Buthelezi (via split decision), since then he has won 11 consecutive fights beating Jesus Silvestre in his last one (=Budler vs Silvestre).
His opponent, Simphiwe Khonco, has a record of 15-4-0 (7 knockouts) and he entered as the No.11 in the same weight class. He suffered two consecutive defeats between 2009 and 2010 but since then he has collected nine victories. Budler vs Khonco is valid for the WBA and IBO World minimumweight titles. Watch the video and rate this fight!