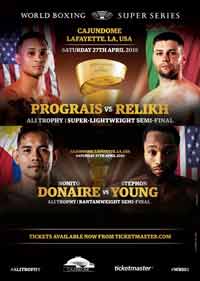 Review by AllTheBestFights.com: 2019-04-27, Nonito Donaire vs Stephon Young gets three stars only thanks to a good finsih.

The world champion in five different weight classes Nonito Donaire entered this fight with a professional boxing record of 39-5-0 (25 knockouts) and he is ranked as the No.3 bantamweight in the world (currently the #1 in this division is Luis Nery). He fought twice last year, losing to Carl Frampton (Carl Frampton vs Nonito Donaire) and beating Ryan Burnett (Burnett retired due to a back injury, Ryan Burnett vs Nonito Donaire).
His opponent, Stephon Young (who replaces Zolani Tete), has an official record of 18-1-3 (7 knockouts) and he entered as the No.91 in the same weight class. He also fought twice in 2018, losing to Reymart Gaballo and winning over Wilner Soto. Donaire vs Young is the semifinal of the World Boxing Super Series bantamweight tournament (WBSS – Muhammad Ali Trophy) and it is valid for the WBA and WBC Diamond Bw titles; undercard of Regis Prograis vs Kiryl Relikh. Watch the video and rate this fight! 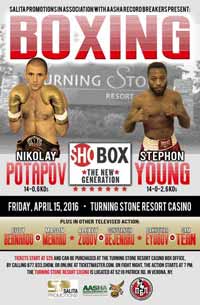 Review by AllTheBestFights.com: 2016-04-15, disappointing fight between Nikolay Potapov and Stephon Young: it gets two stars.

Both undefeated, the Russian Nikolay Potapov entered this fight with a perfect boxing record of 14-0-0 (6 knockouts) and he is ranked as the No.16 super bantamweight in the world while his opponent, Stephon Young, has an official record of 14-0-2 (6 knockouts). Potapov fought just once last year. Beating Pedro Melo while Young fought three times defeating Jesus Gonzales and Terrance Roy, but between these two bouts he drew with Antonio Nieves. Potapov vs Young is the main event of the evening. Watch the video and rate this fight!