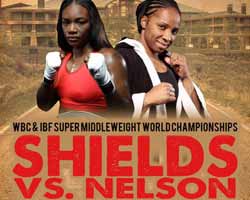 Review by AllTheBestFights.com: 2018-01-12, good fight between Claressa Shields and Tori Nelson: it gets three stars.

Both undefeated, the 2012 and 2016 Olympic middleweight gold medalist and Ibf, Wbc super-Mw champion Claressa Shields entered this fight with a perfect boxing record of 4-0-0 (2 knockouts) and she is ranked as the No.1 super middleweight in the world while her opponent, Tori Nelson, has an official record of 17-0-3 (2 knockouts) and she entered as the No.2 in the same weight class. Shields fought three times in 2017 winning over Szilvia Szabados, Sydney LeBlanc and Nikki Adler while Nelson fought just once beating Latashia Burton. Shields vs Nelson is valid for the IBF and WBC World Female super middleweight titles. Watch the video and rate this fight!