Review: 2012-11-10, pretty good fight and good submission (UFC Submission of the Night) between Thiago Silva and Stanislav Nedkov: three stars. Thiago Silva (14-3-0) entered as the No.38 light heavyweight in the world while the undefeated Stanislav Nedkov (12-0-0) entered as the No.29. Silva vs Nedkov is on the undercard of Rich Franklin vs Cung Le – UFC on Fuel TV 6. Watch the video! 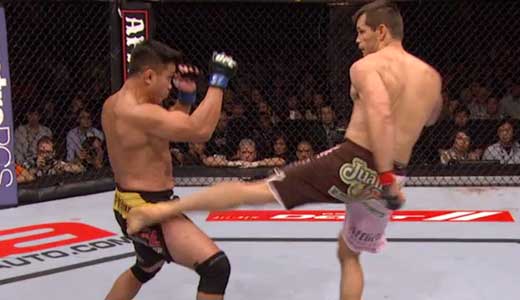 On Saturday, November 10, the UFC will mark its first ever trip to China as part of their final FUEL TV card of the year.
The main event will see former UFC middleweight champion Rich Franklin (29-6, 1 NC) against former Strikeforce middleweight champion Cung Le (8-2).
Cung Le (age 40) is a former International Kickboxing Federation light heavyweight world champion, having a professional Sanshou record of 16-0 before moving to mixed martial arts (Le also held an undefeated kick-boxing record of 17-0). In his last match he got a victory against Patrick Cote at UFC 148, but is the match with Wanderlei Silva that made history: at UFC 139 Le had a good start with his kicks, and landed a spinning backfist that dropped Silva. During the second round, Silva bombed Le with huge punches and knees that completely broke Le’s nose. Le was stunned, bloody and fell to the ground, and the fight was stopped by the ref (= Wanderlei Silva vs Cung Le). In the same night there was a “Fight of the Year” and currently our most

Welcome to Kang Ye-bin of Korea, the newest Octagon girl, who will make her debut at UFC on FUEL TV 6 from Macau.