Review: 2014-10-11, pretty good finish between Enriko Gogokhia and Warren Stevelmans but it is not enough to get three stars. Enriko Gogokhia entered this fight with a kickboxing record of 27-6-0 and he is ranked as the No.15 super welterweight in the world, he suffered his last defeat in 2013 when he faced Dzhabar Askerov (=Askerov vs Gogokhia 2) but he came back to win in 2014 beating Alessandro Campagna.
His opponent, Warren Stevelmans, has an official record of 58-22-4 (16 knockouts) and he entered as the No.21 in the same weight class but he comes off six consecutive losses, the last one against Josh Jauncey at Glory 16. Gogokhia vs Stevelmans is on the undercard of Sergei Kharitonov vs Anderson “Braddock” Silva 2 – W5 Grand Prix 26. Watch the video and rate this fight! 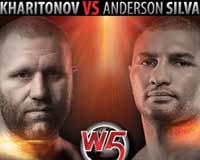 Review: 2014-10-11, tough fight but not so exciting: the second bout between Sergei Kharitonov and Anderson “Braddock” Silva gets two stars. Sergei Kharitonov entered this fight with a professional kickboxing record of 5-4-0 (3 knockouts) and he is ranked as the No.8 heavyweight in the world while his opponent, Anderson “Braddock” Silva, has an official record of 38-11-1 (24 knockouts) and he entered as the No.4 in the same weight class. In their first fight, semifinal of Glory 16 heavyweight contendership tournament, Silva defeated Kharitonov by unanimous decision (=Kharitonov vs Silva I) but after that bout the Brazilian lost to Errol Zimmerman (=Zimmerman vs Silva). Kharitonov vs Silva 2, main event of W5 Grand Prix Moscow 26, is valid for the W5 heavyweight title. Watch the video and rate this fight!