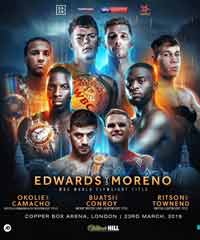 Review by AllTheBestFights.com: 2019-03-23, fight not particularly good between Lawrence Okolie and Wadi Camacho: it gets two stars.

The undefeated former Olympian Lawrence Okolie entered this fight with a perfect boxing record of 11-0-0 (8 knockouts) and he is ranked as the No.23 cruiserweight in the world. In his last three fights he has won over Luke Watkins (Luke Watkins vs Lawrence Okolie), Matty Askin (Matty Askin vs Lawrence Okolie) and Tama Lodi (Lawrence Okolie vs Tamas Lodi).
His opponent, Wadi Camacho, has an official record of 21-7-0 (12 knockouts) and he entered as the No.42 in the same weight class. He lost to Arfan Iqbal in 2017 but then he has won four bouts taking revenge on Iqbal in his last one. Okolie vs Camacho is on the undercard of Charlie Edwards vs Angel Moreno. Watch the video and rate this fight!