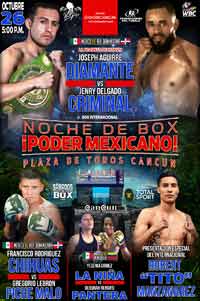 Review by AllTheBestFights.com: 2019-10-26, fight not particularly good between Francisco Rodriguez Jr and William Riera: it gets two stars.

The former Wbo and Ibf minimumweight champion Francisco Rodriguez Jr entered this fight with a boxing record of 31-4-1 (22 knockouts) and he is ranked as the No.9 super flyweight in the world. ‘Chihuas’ Rodriguez lost to Moises Fuentes in 2015 (Rodriguez vs Fuentes) but since then he has won twelve consecutive bouts beating Oswaldo Novoa (Francisco Rodriguez Jr vs Oswaldo Novoa) and David Barreto in his last two (Francisco Rodriguez Jr vs David Barreto).
His opponent, William Riera (who replaces Gregorio Lebron), has an official record of 11-1-1 (7 knockouts) and he entered as the No.166 bantamweight. He was defeated by Michell Banquez last year but he came back to win in 2019 defeating Yofran Tavera and Juan Totesaut. Rodriguez vs Riera is on the undercard of Joseph Aguirre vs Jose Luis Marcano. Watch the video and rate this fight!