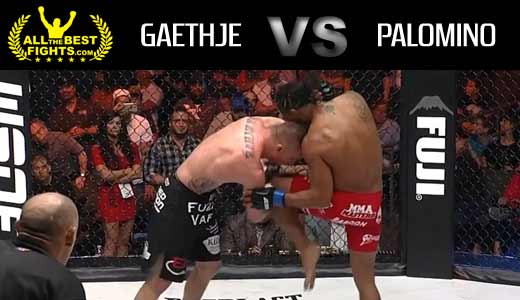 Review by AllTheBestFights.com: 2015-03-28, brutal first frame (candidate for the Mma Round of the Year), non-stop pace and some tremendous exchanges: we have, finally, the first candidate for the 2015 Mma Fight of the Year, Justin Gaethje vs Luis Palomino was an epic war and it gets five stars!

The undefeated Justin Gaethje entered this fight with a perfect mma record of 13-0-0 (85% finishing rate) and he is ranked as the No.19 lightweight in the world; he fought three times last year beating Richard Patishnock (=Gaethje vs Patishnock), Nick Newell (=Gaethje vs Newell) and Melvin Guillard (=Gaethje vs Guillard).
His opponent, the black belt in Brazilian jiu-jitsu Luis Palomino, has an official record of 23-9-0 (65% finishing rate) and he entered as the No.38 in the same weight class. ‘Baboon’ Palomino suffered his last defeat in 2013 when he faced Efrain Escudero, after losing he came back to win beating Jorge ‘Macaco’ Patino (=Patino vs Palomino) and Lewis Gonzalez (=Palomino vs Gonzalez). Gaethje vs Palomino, main event of Wsof 19, is valid for the WSOF lightweight title (held by Gaethje). Watch the video and rate this fight!

Review by AllTheBestFights.com: 2015-03-28, back and forth fight between Thiago Silva and Teddy Holder: it gets three stars.

The black belt in Bjj Thiago Silva entered this fight with a professional mma record of 16-3-0 (87% finishing rate) while his opponent, Teddy Holder (who replaces Matt Hamill), has a record of 8-1-0 (100% finishing rate). Both fighters are not ranked as they haven’t fought since 2013 when Silva defeated Matt Hamill (=Silva vs Hamill) and Holder beat Chris Davis. Silva vs Holder is on the undercard of Justin Gaethje vs Luis Palomino – WSOF 19. Watch the video and rate this fight!