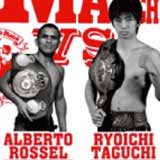 Review: 2014-12-31, technical fight but not so exciting: Alberto Rossel vs Ryoichi Taguchi gets two stars. Alberto Rossel entered this fight with a pro boxing record of 32-8-0 (13 knockouts) and he is ranked as the No.12 light flyweight in the world, he suffered his last defeat in 2010 when he faced Hugo Fidel Cazares, since then he has won eight consecutive bouts, the last one against Gabriel Mendoza (=Rossel vs Mendoza).
His opponent, Ryoichi Taguchi, has an official record of 20-2-1 (8 knockouts) and he entered as the No.11 in the same weight class, he was defeated by Naoya Inoue in 2013 but then he came back to win beating Ryan Bito and Florante Condes. Rossel vs Taguchi is valid for the WBA World light flyweight title; undercard of Takashi Uchiyama vs Israel Perez. Watch the video and rate this fight!

Report broken video
« 2014 BOXING fight – Kohei Kono vs Norberto Jimenez – full fight Video WBA
Best fights of the week 52, year 2014 »
HELP US!!! Since the CORONAVIRUS pandemic started, AllTheBestFights.com has struggled to survive! If you have enjoyed this website for the past 10 years, today we ask you for a little help: