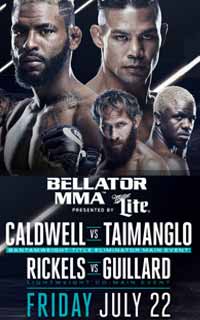 Review by AllTheBestFights.com: 2016-07-22, Darrion Caldwell vs Joe Taimanglo gets three stars only thanks to a good finish.

The undefeated Darrion Caldwell entered this fight with a perfect mma record of 9-0-0 (56% finishing rate) and he is ranked as the No.8 bantamweight in the world (currently the #1 in this division is Dominick Cruz). He has already fought once in 2016 winning over Joe Warren (=Warren vs Caldwell).
His opponent, Joe Taimanglo, has an official record of 22-6-1 (73% finishing rate) and he entered as the No.28 in the same weight class. He lost two consecutive fights between 2013 and 2014, against Justin Wilcox (=Wilcox vs Taimanglo) and Robert Emerson, but then he has won three times beating Sirwan Kakai in his last one (=Taimanglo vs Kakai). Caldwell vs Taimanglo is the main event of the Bellator 159. Watch the video and rate this fight!

Their next fight: Joe Taimanglo vs Darrion Caldwell 2

Video: (Free embeddable video hosted on ok.ru and not uploaded by AllTheBestFights, to report it please visit this link where the video is hosted)