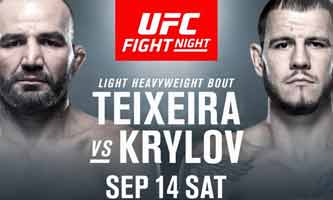 Review by AllTheBestFights.com: 2019-09-14, pretty good fight between Glover Teixeira and Nikita Krylov: it gets three stars.

The black belt in Kajukenbo and Brazilian jiu-jitsu Glover Teixeira entered this fight with a professional record of 29-7-0 (86% finishing rate) and he is ranked as the No.8 light heavyweight in the world (currently the #1 in this division is Jon Jones). He lost to Corey Anderson last year (Glover Teixeira vs Corey Anderson) but he came back to win in 2019 beating Karl Roberson (Glover Teixeira vs Karl Roberson) and Ion Cutelaba (Glover Teixeira vs Ion Cutelaba).
His opponent, the black belt in karate and Fight Nights Global champ Nikita Krylov, has a mma record of 25-6-0 (100% finishing rate) and he entered as the No.16 in the same weight class. He lost to Jan Blachowicz last year (Jan Blachowicz vs Nikita Krylov) but he came back to win against Ovince St Preux in 2019 (Ovince St Preux vs Nikita Krylov 2). Teixeira vs Krylov is on the undercard of Donald Cerrone vs Justin Gaethje – UFC Fight Night 158 (UFC on ESPN+ 16). Watch the video and rate this fight!