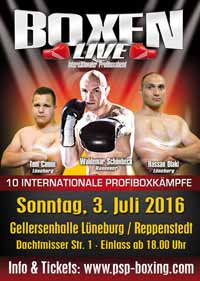 Review by AllTheBestFights.com: 2016-07-03, disappointing fight between Erkan Teper and Derric Rossy: it gets two stars.

The undefeated Erkan Teper entered this fight with a perfect record of 15-0-0 (10 knockouts) and he is ranked as the No.10 heavyweight in the world (currently the #1 in this division is Tyson Fury). He fought twice last year winning over Johann Duhaupas (=Teper vs Duhaupas) and David Price (4-stars-fight, Teper vs Price).
His opponent, Derric Rossy, has an official boxing record of 30-11-0 (14 knockouts) and he entered as the No.39 in the same weight class but he won just two out of his last eight bouts. He beat Akhror Muralimov (=Rossy vs Muralimov) last year but then he lost to Trevor Bryan (=Rossy vs Bryan) and to Bermane Stiverne. Teper vs Rossy is the main event of the evening. Watch the video and rate this fight!