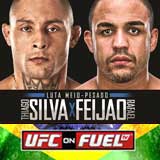 Review: 2013-06-08, good exchanges and good finish: Thiago Silva vs Rafael Cavalcante gets three stars (UFC Fight & ko of the Night). Thiago Silva (14-3-0, 93% finishing rate) entered as the No.37 light heavyweight in the world while Rafael ‘Feijao’ Cavalcante (11-3-0, 100% finishing rate) entered as the No.21. Silva vs Feijao Cavalcante is on the undercard of Antonio Rodrigo Nogueira vs Fabricio Werdum 2 – UFC on Fuel TV 10. Watch the video!