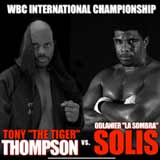 Review by AllTheBestFights.com: 2015-02-27, boring fight between Odlanier Solis and Tony Thompson: their second bout gets one star!

The 2004 Olympic heavyweight gold medalist Odlanier Solis entered this fight with a professional boxing record of 20-2-0 (13 knockouts) and he is ranked as the No.9 heavyweight in the world (currently the #1 in this division is Wladimir Klitschko); he suffered his first defeat in 2011 when he faced Vitali Klitschko (=Klitschko vs Solis) then he won three consecutive bouts but in 2014 he lost again: the very first bout against Tony Thompson (=Solis vs Thompson I).
His opponent, the 43-year-old Tony Thompson (nine years older than the Cuban), has an official record of 39-5-0 (26 knockouts) and he entered as the No.26 in the same weight class; he fought twice in 2014, beating Solis but then he lost to Carlos Takam (=Takam vs Thompson). Solis vs Thompson 2 is valid for the WBC Continental Americas heavyweight title. Watch the video and rate this fight!