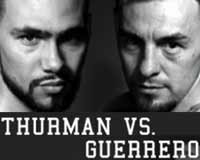 The undefeated Keith Thurman entered this fight with a perfect boxing record of 24-0-0 (21 KOs=87%) and he is ranked as the No.6 welterweight in the world, he fought twice in 2014 beating Julio Diaz (=Thurman vs Diaz) and Leonard Bundu (=Thurman vs Bundu); both figths were valid for the interim Wba Ww title.
His opponent, Robert Guerrero, has an official record of 32-2-1 (18 knockouts) and he entered as the No.10 in the same weight class, he has won world belts in four different weight classes (two of which Interim) but he lost his last world-title fight, against #1 Floyd Mayweather Jr in 2013 (=Mayweather vs Guerrero). After this bout ‘The Ghost’ Guerrero fought just once beating Yoshihiro Kamegai in 2014 (=Guerrero vs Kamegai). Thurman vs Guerrero is valid for the WBA World welterweight title. Watch the video and rate this fight!